In the Hand of the Goddess by Tamora Pierce

In the Hand of the Goddess by Tamora Pierce
Series: The Song of the Lioness #2
Format: Paperback
Goodreads

Don’t get me wrong I love the first book but whenever I reread the series there are so many things that it blows my mind to remember they didn’t happen until this book, like Faithful and the necklace. It actually helps me make sense of Pierce’s later transition to pairs instead of quartets. (Though I would be plenty happy if she had just made her books longer and kept the number of books. I can’t get enough of her.) I still think George Cooper is the love of my life. This book carries into Alanna becoming a knight, I would call that a spoiler but you’re kidding yourself if you think she is not going to make it! The conflict in this book is that of Roger, Duke of Conté but I always feel that it is Alanna of Trebond who keeps you reading no matter what she is doing. 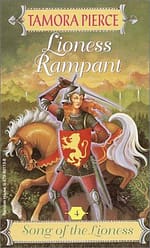