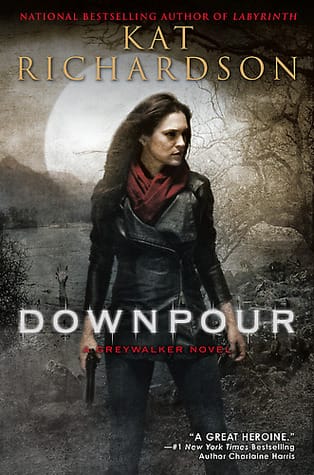 This is a later novel in a series so there might be spoilers but this is the first one I read.

Harper is still recovering from her most recent death.  It has changed her connection to that other realm, the Grey.  She is back to work but her body and her mind are not fully recovered.  She was just looking for a witness but she found a murder covered up and ignored for 5 years.  The more she digs the worse it seems and this is a case that she cannot refuse because there is something wrong with the Grey so it is her job, not her PI job but her Greywalker job that demands she clean this up.

Okay, I have to gush.  It is really rare that someone’s writing is so good that I am simply aware of it.  Usually good means I just read and enjoy it.  If it is bad then I get pulled out of the story.  Richardson… absolutely wowed me.  From the first paragraph the description immerses you.  The amazing detail is never too much, and it truly fits the voice of  a PI taking everything in.  I never felt lost but I feel like if I had read the books before I would not have felt like there was too much catching up.  I have a decent idea of what happened before but the information was given at relevant times, when introducing known characters for instance.

Okay I suspected who the fifth person was for some time and it drove me a little nuts but this is still one of the best books I have read in some time.  There is so much research.  So much detail has been put into every aspect, each person, each location.  Richardson doesn’t make up a place, that would be too easy, she inhabits a place.  I do think it helped that I could better envision this after spending time at the lake Ben grew up on.  There is such a cast that I wish I knew the history behind.  I want to know more about Harper, I want to start at the beginning with her.  Yep, I’ve said it.  Another series that I want to get into, top priority.