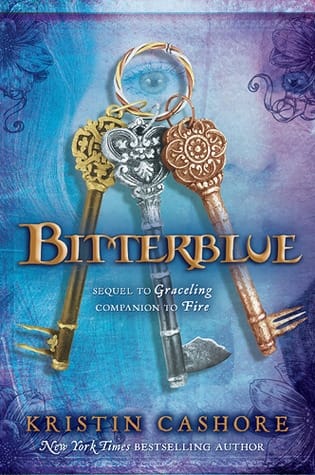 Bitterblue is now queen of Monsea, still under the influence of her father Leck, a violent psychopath who altered minds. Her advisers want to pardon evildoers and forget everything, but she sees the past holds fast. Two thieves, who only steal what has been stolen, hold the truth and change her life. One, his Grace skill unidentified, has a key to her heart.

Gaaaah! I love this series. Okay it is not really a series but it is my favorite! Bitterblue is growing up but it isn’t an easy process. Her country is still scarred. Wounds that continue to reopen. The damage stretches from her closest advisor down to people on the street corners. Leck changed the culture. He made the people forget. In some ways it was worst for those closest to the king. There are some seriously dark things that happened. Bitterblue feels trapped in her life and her adventures out of it bring her to even more harsh realizations about what her father did. She begins to truly meet her people, in particular a certain graceling young man. There are appearances by some familiar faces. I still think that Fire is my favorite book but Bitterblue keeps this whole set high on my list. I hope for more in this universe but I also won’t be surprised if this is the end.