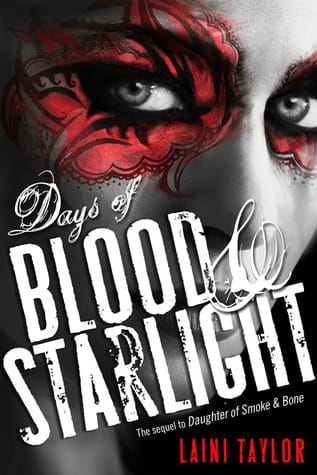 This was easy I just pulled straight from my Christmas list! I’ve been very good this year about not buying books and reading what I have but it definitely means I have a strong wish list at the end.

1. Days of Blood and Starlight by Laini Taylor

I really loved the first book in this series.  I’ve avoided reading reviews of this one so ironically I’m not sure exactly where it takes the story but I look forward to finding out.

Funny note I like how the two covers go together so well.  It kind of makes me like the first cover better.

The truth has been revealed, but the old wounds are deep.  Can Karou forgive Akiva? Can he even forgive himself?  Can what has been destroyed be saved?

2. The Drowned Vault by N.D. Wilson

Another series where I absolutely loved the first book and am super duper excited for the next one.  I think this is like the perfect MG adventure.

They redesigned the cover of the first book to match this one and as much as I liked the original I think that this will be a much easier trend to continue.

Cyrus and Antigone have settled into Ashtown, but the Dragon’s Tooth is still out there wreaking havoc and something has to be done about it.

I don’t have a house yet but I want this book ready for when I do.  They focus on being budget friendly and do it yourself.  Accessible home ideas and some are apartment friendly!

I NEED to finish this series!  I have to admit I don’t think Bitterblue can top Fire but I still really love Cashore’s writing.

I think that the covers for this series were well designed from the beginning and have had amazing consistency that really fits their various protagonists.

Bitterblue is now queen but there is still much to be remedied after her father’s terrible reign.  Her advisors want to forget the past but it might not be so easy.

5. Necromancing the Stone by Lish McBride

See I seriously start way to many series, because here is another one where I loved the first and am addicted.  Also the title makes me giddy.

As for covers, these are just drool worthy.  Can this artist design me a tattoo?

Sam is adjusting to life as a necromancer with a were girlfriend, but he can only do so much barely knowing how to control his own power.  Douglas wasn’t the only danger and we’re not entirely sure he is gone, he is a necromancer after all.

6. Palace of Stone by Shannon Hale

It seems like forever ago, but really it was only 2006 when Hale wrote Princess Academy.  It is a strong stand alone, but now we get to find out what happened after.

Already a good match, there has been a new cover for the first novel which slightly alters it with a new young woman to match the sequel.

Miri travels to the city, to help Britta prepare for her royal wedding, but new allegiances and interests conflict with the old and she finds herself torn.

7. The Raven Boys by Maggie Stiefvater

Okay you think it is bad that I already started so many series, well now I want to start more!

This cover is gorgeous!  Especially because I look it and find it visually appealing but I can also tell there are things that will make more sense later.

Blue has grown up with the prophecy that she will cause her true love to die, but when one of the ghosts that usually ignore her speaks directly to her, something has changed.

This was one that the blogging universe threw in my lap.  There were some fascinating posts on the creation of this magical alternate history and I am desperate to give it a try. And it is a debut, at least under this name.

The cover embraces the historical but giving a hint of the magic.

Magic in Boston is 1767.  Ethan Kaille is a thieftaker and his conjuring is one of his major tools.  Then a job sets him against another conjurer, one who might best him.

9. Shadow and Bone by Leigh Bardugo

Another one that I would have probably missed before my blogging days.  I’ve really been enjoying fantasy that avoids the medieval trope and who can resist a Russian flavor. And it is a debut.

This cover artist can design tattoos for me as well.  Have I ever mentioned I like swirly organic patterns?  And it makes the Russian foundations clear.

Alina was just a soldier but then she reveals a power that might save the nation of Ravka and is whisked away to be trained the the Grisha, the magical elite.

Female assassin.  Yep, that is all you need to say and you have me utterly hooked. And another debut!

As far as the cover it is very… look pretty girl! There are other things though like the intriguing castle in the background and the blade on her arm.

Calaena was caught and that means hard labor but she is given a chance to become the royal assassin.  Except this competition comes with its own dangers.

Okay I cheated and included one more because these aren’t quite prioritized and I couldn’t draw the line before this one.

Dragons and music and treaties oh my!  Yep another debut.  Blogging definitely keeps me more in the loop on these.

I feel like this cover really stands out.  It doesn’t try to be shiny, there is no portrait or pretty dress, I feel like it exudes the world and I like that.

Seraphina has a secret, the secret behind her music is she is half dragon and it is a deadly secret.  The balance is already in danger as is the treaty and Seraphina is determined to investigate.