The Boggart by Susan Cooper 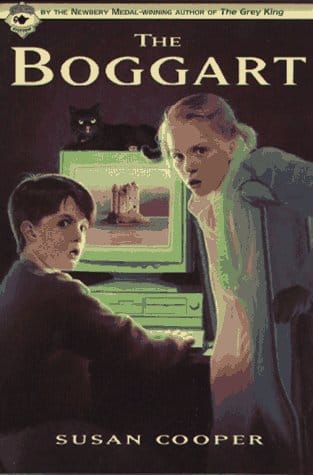 I read this years ago but honestly I couldn’t remember what I thought of it.  It was probably quite similar to my feeling right now.  Meh.  I don’t dislike it but it falls sort of flat in comparison to The Dark is Rising Sequence.  It is heavily dated by the technology used.  I mean I read the description of the computer the nerds drool over to my boyfriend and we both laughed out loud.  Black and white monitors and floppy disks are something more alien than time travel to today’s kids.  A modern kid would tell you to email the boggart.  You spend a lot of time watching the boggart’s tricks but because he quickly forgets things even his own grief he is hard to relate to.  To use my character terminology I feel like the kids are round but they are not dynamic.  No one changes.  There is no lesson learned at the end.  It hardly feels like a resolved conflict even.  I did think she did a good job of giving a decently well rounded view of the people within the theatre world without introducing to many alien concepts for kids.  Though dear world, as an ex-stage manager why oh why do you always have to portray us in literature and film as either a glorified light board op or the crazy nazi with a megaphone?  (Cooper goes with light board op).  I have the 1995 edition, though there is a new one with a less dated cover but we all know any library has the old cover with a computer older than anything kids today have ever seen.