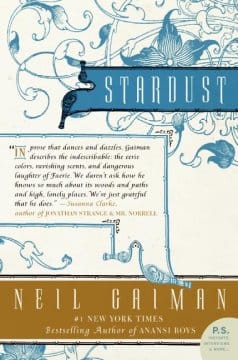 I saw the movie first, so this might be a little different. The tale begins with a young Dunstan Thorn, but we are not with him for long, instead we move on to Dunstan’s son, Tristan, who has always believed that his father’s wife was his mother. Perhaps if his father had told him that his mother was from across the wall, Tristan might have realized earlier what he was getting himself into. One of the biggest changes that stood out to me was the varied emphasis on side characters many great ones from the book are omitted from the movie where as the relatively small part of the captain is made huge. I think I love the dead brothers even more in the book, which is saying something and the significance of their names stands out even more including mother, Una. So anyway we follow Tristan on his journey for true love, the results are just not what he imagined they would be. If you have seen the movie, when you read the book you should realize that Gaiman can do brilliant things, but they just aren’t Hollywood. The ending in particular is absolutely bloody fabulous, but people would have left a movie theater groaning… I guess that is life.