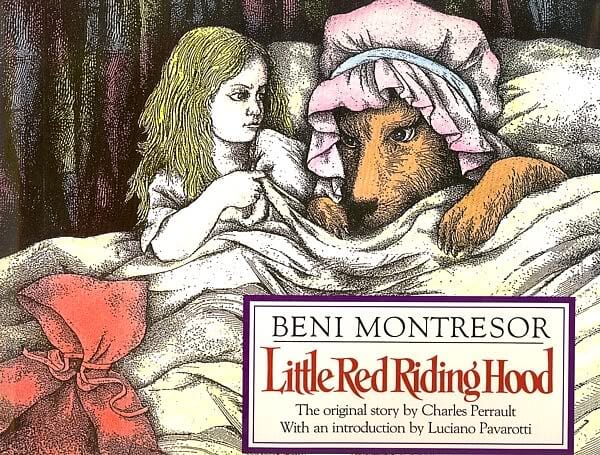 I don’t know if I had ever read a translation of the original text before but especially when paired with Montresor’s illustrations it is haunting from the very beginning.  The textured black that makes up walls, forests and curtains seems to loom over you and the heavy shading adds to the darkness.  This girl doesn’t even know to be wary and it adds to it that this wolf looks like a gentleman.  I don’t think I’d ever seen a version before where you actually see one of them getting eaten but Montresor gives you quite the shot of the wolf with the girl’s head in it’s mouth.  The text ends with the girl being devoured but the illustrations continue with her floating almost angelically in the wolf’s distended belly for two double page spreads and then on the last page of the book you get a silhouette of the hunter in the door behind the girl trapped in the belly.  I suppose it hints at the more modern versions that include a hero, but if this were a student’s first exposure to the tale it might be confusing.