Down the Mysterly River by Bill Willingham, illustrations by Mark Buckingham 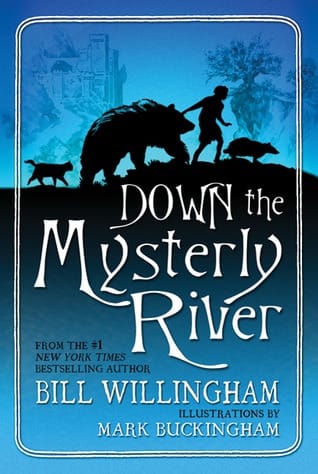 Max the Wolf is not actually a wolf but rather a boy scout and young detective.  He finds himself in an unfamiliar woods with no idea of how he got there, there are others like himself but they are animals that talk and in Max’s world that just doesn’t happen.  So he must deduce what this strange place is and why there are people with blue swords chasing him and his new friends.

I honestly don’t know what to think of this book.  I enjoyed it in a very casual way.  It never got me super duper excited.  Yes I know it is silly that I expect super duper versus just excited.  I enjoyed it and found it clever and well written.  It is an excellent book.  It has cute and funny and scary.  I did think at moments that it felt like it should be visual.  I know of the pair’s other work but am not familiar with it but something about the descriptions felt like they were describing it as an illustration should make it look rather than more realistically.  This added to the kind of enchanted feel.  I figured out the mystery early on (when they first discuss missing memories) but I still enjoyed seeing him figure it out and see it through.  It truly is a really interesting concept, though the explaining of it all in the end is a bit Exposition!  The characters are perfect.  I’m going to have to fight the instinct to repeatedly change my Goodreads rating.  I hate stars.  Overall definitely enjoyed.  It is a good book, I think I’m just personally weird about it.

Also this book led to a hilarious moment of Ben and I huddled on the couch going through the Boy Scout Handbook from his days.

Side note: Is it weird their names amuse me: both “ingham” both 4 letter first names that kind of mirror the first 4 letters of their last names?