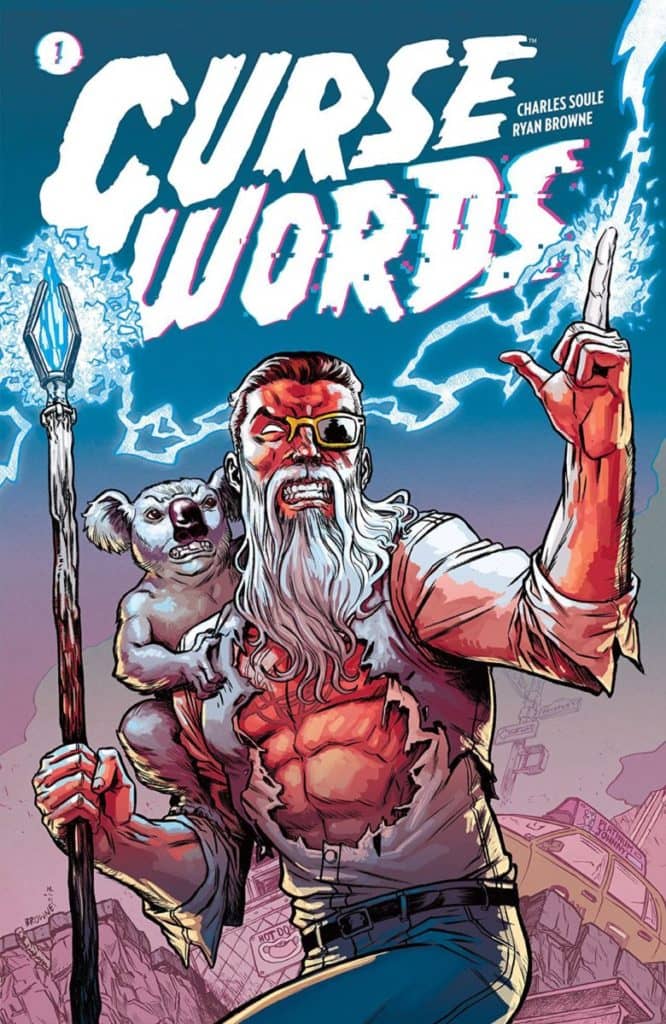 A wizard has appeared in present-day New York! His name is Wizord, and he's here to save us all from dark magical forces bent on our destruction. He's the best wizard of all time! Or... he's not, and he's lying to everyone, and secretly is the dark magical force, but wants to hang out in our world for a while because it's so much nicer than the hellhole he comes from. Secrets, and spells, and talking koalas - CURSE WORDS is a gonzo dark fantasy from CHARLES SOULE (Daredevil, Letter 44, Star Wars) and RYAN BROWNE (God Hates Astronauts). Collects Issues 1-5.

When this series started I was curious but didn’t feel like I had room on my list for a book that looked so… silly? Then we picked it for Acme Comic Book Club and I am so glad that we did.

Wizord is sent to destroy our world… but he decides he kind of likes it here. The humor is fairly tongue in cheek nerd service so it suited me just fine. Okay I laughed, a lot. Wizord adopts a fairly hipster style, Margaret decides she doesn’t want to be a rat any more, even the universe he comes from has a certain 80’s fantasy movie or game vibe.

The art is incredibly detailed. The costumes are where I feel like it initially strikes you, but it is throughout. There are two pages that it is important to compare and they are different enough but it gives you such a strong sense of déjà vu. I’m curious to see what it ultimately means. The colors are gorgeous and I’m also curious to see if those bear a deeper meaning. The contrast of the big bad, I think adds to the power of the color. During comic book club we butchered Sizzajee’s name so many times, it was hilarious but by the end I could actually remember it. Ruby Stitch is so different from Wizord but also the same. There are a lot of questions posed in this volume that I look forward to seeing how it proceeds.

I try to buy things in a consistent format, so I am not buying individual issues, which is absolute torture. We did have the fantastic opportunity to be part of the Van Tour. So I got to meet Soule and Browne. I already had the paperback, but I got the Roadshow hardcover edition. They each did a sketch in one of the books and it is absolutely adorable. Both of them were great guys to talk to. I went total fan girl, I have a Wizord pin and a van tour t-shirt. So I think you could say that I am DEFINITELY in love with this series.