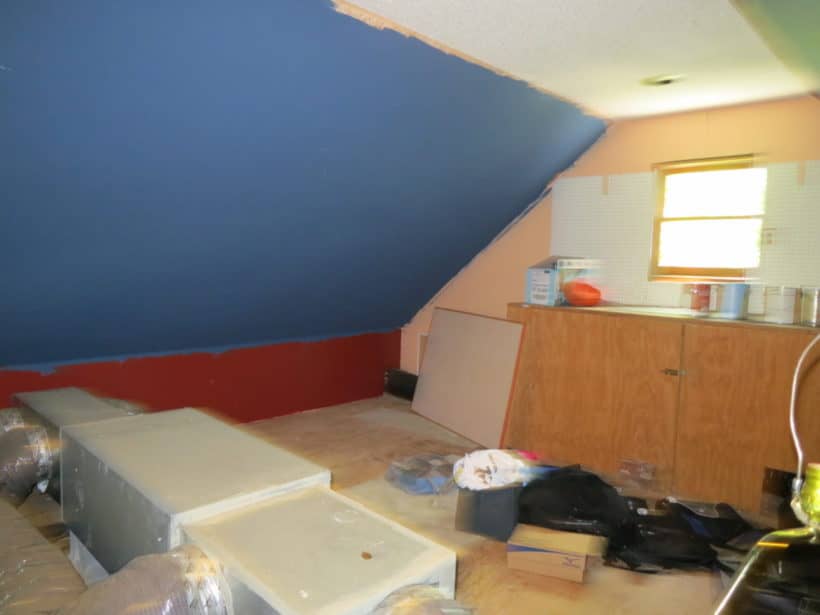 This is going to be a picture heavy post… because you finally get house pictures! The before photos are from before ownership even changed, so the furniture and stuff is from the people before us. The after photos were taken around November???

Normally we enter through the kitchen, thus in the before photos you also got a nice glimpse of that teal in the office.

Some paint made a big difference, as well as taking off the awkward white shelves. I love this color. We’re still perfecting where we store stuff.

Then we move into the office, which was an eyesore. Even the closet was painted pink.

We painted it gray and added a lot of stuff. We have lots of plans for new shelves.

Then the full bath because the office is also the guest bedroom. The couch has since been replaced with the nicest futon you’ve ever seen.

We removed the sprayed ceiling in all the bathrooms. Thank goodness. Also that yellow was terrible. Now we have a themed bathroom!

Then we’ll head back out to the kitchen and into the dining/living room. The walls have the grass like wall paper. Yes I dream of darker wood floors. You can also see the front door, across from that is the coat closet which is fairly useless as a coat closet.

You can’t see it but the back wall of the dining area is actually a dark brown. At first we through Ben was crazy with the 3 colors but we love it. It fits with our stuff so well. I think someday I might rearrange the dining area so one side of the table is against the window.

This is the landing, no after pictures but it gives you a good idea of the overwhelming color combinations.

Then the roomies’ bedroom… It was very blue!

Now with very different paint. This room has been rearranged since.

Probably the worst before, the roomies’ bathroom. Don’t you love that border. Note the nasty vent.

Now nice and gray with a pretty shower curtain.

The laundry room, which was horrible and pink.

I love this color, I ran around calling it beeeauuutiful.

Mine and Ben’s room, just look at the dust on the ceiling and the horrible patches.

A very different after, I love this color and everything.

Yes, there was only one working lightbulb in the bathroom.

There isn’t an after of the attic but it gives you an idea of size that this is just half of it. They cleared all that stuff out for us, so we were able to move stuff up there immediately.

So there it is, now you have a reference for when I talk about it. I realized I don’t really have exterior photos. There were the ones from the listing but when Spring comes I will get better ones.