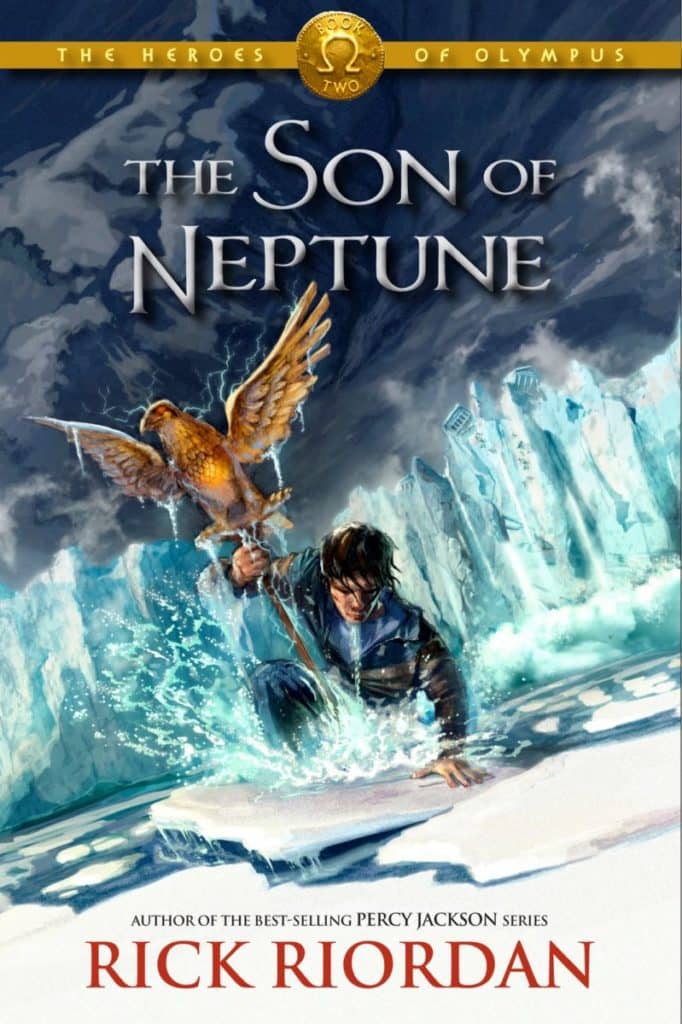 The Son of Neptune by Rick Riordan
Series: The Heroes of Olympus #2
Format: Hardcover

Seven half-bloods shall answer the call,
To storm or fire the world must fall.
An oath to keep with a final breath,
And foes bear arms to the Doors of Death.

Percy is confused. When he awoke from his long sleep, he didn't know much more than his name. His brain fuzz is lingering, even after the wolf Lupa told him he is a demigod and trained him to fight with the pen/sword in his pocket. Somehow Percy manages to make it to a camp for half-bloods, despite the fact that he has to keep killing monsters along the way. But the camp doesn't ring any bells with him. The only thing he can recall from his past is another name: Annabeth

Hazel is supposed to be dead. When she lived before, she didn't do a very good job of it. Sure, she was an obedient daughter, even when her mother was possessed by greed. But that was the problem — when the Voice took over her mother and commanded Hazel to use her "gift" for an evil purpose, Hazel couldn't say no. Now because of her mistake, the future of the world is at risk. Hazel wished she could ride away from it all on the stallion that appears in her dreams.

Frank is a klutz. His grandmother says he is descended from heroes and can be anything he wants to be, but he doesn't see it. He doesn't even know who his father is. He keeps hoping Apollo will claim him, because the only thing he is good at is archery — although not good enough to win camp war games. His bulky physique makes him feel like an ox, especially infront of Hazel, his closest friend at camp. He trusts her completely — enough to share the secret he holds close to his heart.

Beginning at the "other" camp for half-bloods and extending as far as the land beyond the gods, this breathtaking second installment of the Heroes of Olympus series introduces new demigods, revives fearsome monsters, and features other remarkable creatures, all destined to play a part in the Prophesy of Seven.

Goodness that is a LONG synopsis. Okay, don’t get me wrong but this was the hardest time I had reading any of Riordan’s books. Let me explain. I was glad to have Percy back but waiting on him to catch up was torture. With Jason we were solving the puzzle along side him. Now we start over at the beginning with Percy and it feels like it takes an eternity. So much time is spent on solving a puzzle that we already know the answer to. I’m not sure what would have been a better solution but I will admit that I was pretty frustrated by the time we actually got to the adventuring.

I think that Percy’s new companions are quite fun. Though I will admit sometimes I want to shake my head at the tendency for there to budding romance around every corner… probably another reason I love Leo. Hazel is probably my favorite of this bunch. She has a dark secret and a dark past and is the definition of tiny yet fierce. I really like the unique rules affecting the mythology as you go north into Canada and Alaska.