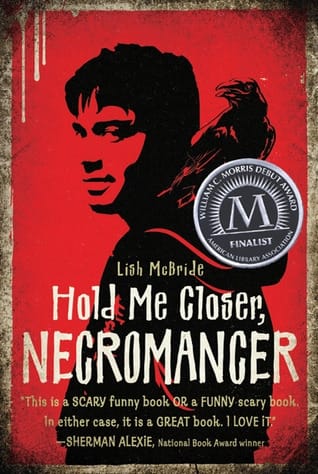 For a long time I knew nothing about the Morris Award.  It doesn’t get quite the attention of the Newbery, Caldecott and Printz, but in some ways I think it is even cooler.  This award not only highlights awesome books, but those by new authors stepping onto the scene.  I can remember when I was that person who had a list of like 10 authors I would read for fun and I was terrified of branching out.  These books are the ones that jump up and let you know that awesome stuff is being written here and now.  New favorites to stack fondly next to the old fall backs.

Okay so I have to admit that I am musically ignorant, in a lot of ways.  The title gave me that itch on the back of my brain but I didn’t think much of it.  I actually loaned this to a friend before reading it and she is the one who made me aware of the fact that all of the chapter names are all song based.  Okay yes I would have realized at some point but I can be quite dense.  Back to the book: There are a couple key things about Sam that McBride establishes without beating into your brain: crows, music, skateboards, loyalty…  My natural curiosity makes me want to know more about the crows but ah what can you do.

But here I am as always blabbing before telling you anything about the story.  Sam dropped out of college after his first year.  He has still managed to keep an apartment rather than moving home but he is stuck working at a fast food joint.  It isn’t too bad though because his friend Ramon works there with him even though Ramon stayed in school and they’ve made friends with Frank and Brooke.  Then they accidentally get the attention of the wrong man but he has eyes only for Sam.  He says Sam is like him, a necromancer.

A lot of questions are raised including how did he not know?  He ends up with all sorts of new friends and old ones altered, the range goes from were-beasts to severed heads to Harbingers.  The learning curve is fast and the stakes are high but neither cast nor writer lets that dampen their sense of humor.  It’s not always laugh out loud make your sides hurt humor, but I found myself reading the book with a persistent smirk stuck on my face.  There are hard moments like Sam’s confrontation with his mother.

I love that Sam is probably 19-20 (it’s after his first year of college but we don’t know exactly how long after).  This age group is often skipped, high schoolers can’t read about what comes next, the early twenties crowd can’t read about themselves whether they are in college or not.  I love that even though it is a funny book and a magical book that there are still real moments like dealing with a crappy job and a crappy apartment and issues with your family.  I love the way she handles Sam getting naughty.  Oh and my biggest love of this book is Mrs. W, definitely!

And can I just say I think this is one of my favorite covers EVER.  It’s grungy but shiny.  You get this attractive image of Sam without it saying I’m going to tell you exactly what he looks like.  The font.  The crow.  And of course if you haven’t noticed if I’m not familiar with an author I tend to kind of stalk them at this point.  So July 2012 she has a story about Frank coming out in an anthology titled Cornered: 15 Stories of Bullying and Defiance.  Then in September 2012, Necromancing the Stone, I can’t even type that title with a straight face.  And now I’m going to go conspire on how to get a signed copy to match my copy of this book!