The Blue Sword by Robin McKinley 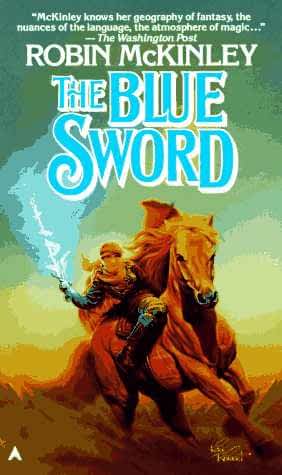 Harry Crewe is a young woman fresh from the Homeland (picture England around the time of India’s colonization, technologically we have revolvers, trains and wireless stations) and she is already falling in love with the deserts of Damar, called Daria by the Homelanders.  Though at first glance this may resemble our world but there are things about this land even the would be colonizers refuse to acknowledge, like the kelar that flows through the people and the land.  Then Harry is taken from her room at night by the Hillfolk king, Corlath.  Her destiny is entwined with this land in her blood and in her heart.  I think I’ll stop there, I really am terrible at the summaries.

It to this day baffles me that Sword was written first.  Of course that is what makes The Hero and the Crown a prequel, but I suppose the completeness of the back story in Sword is what makes it convincing.  I don’t know why it took me this long but recently I began following Robin McKinley’s blog and have realized Damar existed before and is still an itch so who knows how complete the world is.  One thing I love about this story is that there is such friendship and yes there is a happily ever after but what romance there isn’t doesn’t gush all over half the book.  I’m always amazed by the amount of background knowledge seamlessly included.  Information about horses, metaphors using ship parts, just enough bits of created language to be authentic without getting confusing.  I always forget that this book is in the third person because I always get so wrapped up in Harry, but it fits because it enables you to see how sometimes short sighted Harry is in regards to how she is perceived by others.  I’m not being very coherent… When Robin McKinley creates a world it becomes real.  There might be a brief commercial (aka more pressing assignment) break before The Hero and the Crown.

The Hero and the Crown by Robin M