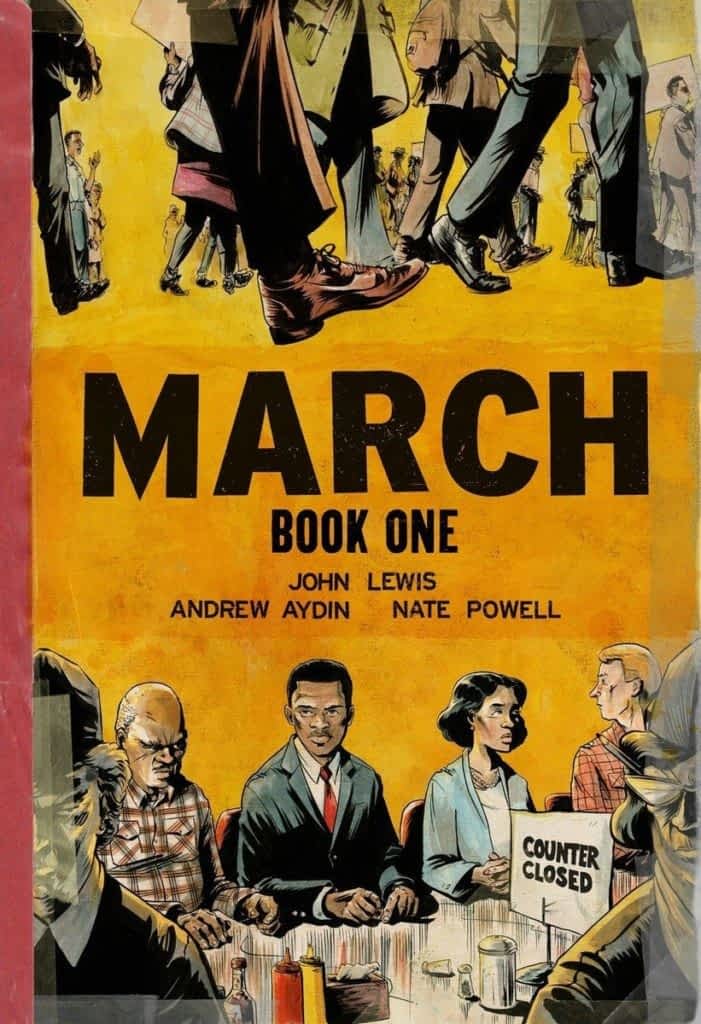 Congressman John Lewis (GA-5) is an American icon, one of the key figures of the civil rights movement. His commitment to justice and nonviolence has taken him from an Alabama sharecropper’s farm to the halls of Congress, from a segregated schoolroom to the 1963 March on Washington, and from receiving beatings from state troopers to receiving the Medal of Freedom from the first African-American president.

March is a vivid first-hand account of John Lewis’ lifelong struggle for civil and human rights, meditating in the modern age on the distance traveled since the days of Jim Crow and segregation. Rooted in Lewis’ personal story, it also reflects on the highs and lows of the broader civil rights movement.

Book One spans John Lewis’ youth in rural Alabama, his life-changing meeting with Martin Luther King, Jr., the birth of the Nashville Student Movement, and their battle to tear down segregation through nonviolent lunch counter sit-ins, building to a stunning climax on the steps of City Hall.

Many years ago, John Lewis and other student activists drew inspiration from the 1950s comic book "Martin Luther King and the Montgomery Story." Now, his own comics bring those days to life for a new audience, testifying to a movement whose echoes will be heard for generations.

This was the February Acme Comics Book Club pick that got postponed until the first week of March and then my lazy butt didn’t write this until now!

There is what you know and there is what you kind of know. I often talk about how my partner, Ben, remembers things from history and science and such better than me. I think part of this is the fact that he was home schooled and dealt with a lot more source material instead of textbooks with fact lists. I live in Greensboro where four young men sat down at the Woolworth’s counter and they were not the proper color. This book takes place elsewhere but does mention them. This book gave a… substance to the era and to the actions that it did not have for me before.

I also often talk about how I like when people in history feel like actual people. We act as if people in history or people in power are Hercules of myth, but they are just people. People with jobs and families and hopes and bills to pay. A lot of what I enjoyed about this book was that sense of tangibility. It isn’t just about the most famous people and there are details like the chickens. The fact that John Lewis needed his parents permission to try to become a student at a white school because it would be putting them in danger. The people who were preparing for sit ins only slowly but surely. The people who were part of the movement but knew they couldn’t be at the forefront because they knew they couldn’t stop themselves from lashing out. Even details like the fact that the police dropped the bail amount to try to empty the jail but they still refused to post bail until they were simply released.

I also thought it was interesting how it was put into the context of a story told on the eve of another historic event, the inauguration of Barack Obama. I liked how this both said that it is never over and also emphasized that it was not so long ago. It also resonates currently because of other more recent struggles, like the rights of LGBTQ+ people. Overall I found the book very accessible, easy to read, quick, enjoyable, and enlightening. I’m not sure what else you could ask for.